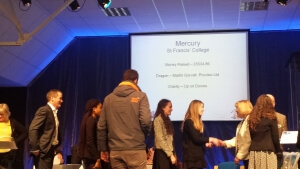 Pupils from secondary schools across North Herts attempted this challenge and succeeded in raising over £10,000 for fantastic causes in the local area.

Director, Martin Gorvett, represented Provisio in team Mercury as the ‘dragon’ business advisor and together with pupils from St Francis, worked in support of the Up On Downs charity. Mercury won ‘Best Presentation’ and ‘Most Money Raised’ on the night, making £5,534.86 overall by selling beanie hats with the charity’s sunflower logo on them and hosting an auction. Sande Nuttall from the Downs Syndrome support group had this to say, ‘I am blown away by the amount they have raised, five times more than their target’.

Team Luna, also made up of St Francis pupils, saw Virtual Business Source’s managing director, Robin Mead, take on the role of ‘dragon’ business advisor and together they won ‘Most Innovative Business Idea’ at the awards ceremony after creating a personalised calendar featuring facts about their charity, Carers in Herts.

UHY Hacker Young was represented by consultant, Chris Maylin, in team Onslaught of Dragons which was made up of pupils from the Priory School; they came away from the awards ceremony with ‘Best Co-Operation with their Charity’, Dr Hadwen Trust.

Similar schemes across the country have raised £80,000 so far this year, an overwhelming success that we look forward to continuing when the next challenge starts in September!